Noah Warsaw is one of the most prolific Polish artists active in performance art on the international scene. He graduated from the Academy of Fine Arts in Warsaw in 1974. Whilst working in the field of performance art he was introduced to the European art practice and a new way of group collaboration known as Aufmerksamkeitsschule (BLACK MARKET group performances: 1984-1988).

After the Chernobyl nuclear catastrophe he resigned from participating in the international art market and explored individually the territory of invisible realities (STALKER research project: 1989-1998).

Since the beginning of the 21st century he has developed his dream of beauty, recognising the strict discipline of a fine art movement as GROUNDWORK / FINE ART. 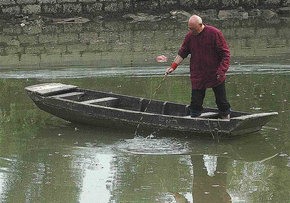