Born 1970 in Manila, Philippines, lives and works in Copenhagen.

Lilibeth Cuenca Rasmussen is a graduate from The Royal Danish Academy of Fine Arts in Copenhagen (1996-2002). Cuenca primarily engages in video and performance art. She often takes her own Danish-Filipino background as a point of departure. Cuenca gathers, adapts, and universalizes her narratives in both a critical and humorous approach in regards to issues such as identity, culture, religion, gender and social relations. Cuencas productions involve scripted texts, songs; composed music as well as intricate visual elements that include set design and costumes.

In her re-enactments Cuenca explores her own art historical heritage and questions both women’s place in art history and the artist identity as such.

She participated in the 2011 Venice Biennale in the Danish pavillon with Afghan Hound: four songs on video plus a live performance. Cuenca has recieved several prizes most recently in 2012 The Carl Nielsen & Anne Marie Carl Nielsens Prize, in 2009 The Arken Prize, Travel Grant. Donated by Annie & Otto Johs. Detlefs´ Philanthropic Foundation, in 2008 Eckersberg Medal of Honor, in 2007 Aage & Yelva Nimbs Fond, Grant of Honor &  Ole Haslunds Fond, Grant of Honor, in 2006 The Danish Art Price, Aschehoug, travelgrant. In 2009 she was a resident at the ISCP, Artist in residency programme, New York City, sponsored by the Danish Arts Council, where she also in 2005 received the Three Year Work Grant.

My consiousness about feminism got stronger when I was about 30 years old. At the same time I got a child, and I got out of art school. It actually changed my works in a different direction. Since then they have had more focus on gender issues, and it has been important for me to do works about women. I realized that being a mother and a female hard working artist at the same time wasn't as easy as being a man. Women simply have to work harder to achieve the same level as their male colleagues. We are raised within a patriarchal society and traditions, so boys and girls are raised differently by their parent(s).

It takes time and understanding about that men and women are different, we think and act differently, but this shouldn't be a barrier to equality. I believe that in order to achieve a dialogue and understanding about feminism and equality, it is important to find a "language" that can be understood by both gender. This is one of my aims in my works. I want to show an image of a strong woman with attitude, and who serves her point of view in a direct way. A woman, who is proud of being a woman. I am not concerned of using my femininity and sensuality in my works. My character is dual and contains male and female values. Feminism is simply a fair play, that concerns both gender. It isn't about competition, excluding or battling, but something which have advantages for both sex.

The feminist from the 60's have done hard work for us. Unfortunately both men and women today are afraid of the word feminism because of the 60's. They were men haters and at the same time they tried to be as men. I don't know if they could have done it differently then? Anyways as a woman today I am greatful for their struggle. But we have unfortunately not achieved equality and I must say that women simply have to work harder to gain the same as men. It is important to continue their work, even though with different means today. 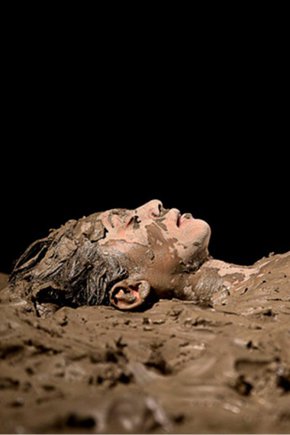