Born in Sichuan, Lives and works in London.

Echo Morgan studied at the High School of the Sichuan Fine Arts Institute before moving to London where she gained a BA in Graphic Design at Central Saint Martins and a MA in Fine Art at the Royal College of Art. A student in the Performance Pathways course at the RCA directed by Professor Nigel Rolfe, Morgan’s work were singled out by curator Jonas Stampe and included in the 9th edition of Infr’Action – Festival International d’Art Performance in 2013 and in the show DigitaLive in 2013/2014 in Canton, China.

Working within a non-dualist aesthetic, where concept and beauty encounters harshness, Morgan creates a singular and often poetic expression where will power and vulnerability constitutes a common ground for a new becoming.

Morgan wrote in her Artist Statement :”The role of translation, the passage between Language, body and gesture. my family name XIE has magically illustrated my art practice. The shift from Chinese into English and back again, the relationship between performanceĂŻÂĽÂ?feminine writing and moving image. Always movement across the surfaces, entering and exiting backwards and forwards therefore I cannot settle on any one point. I am in flux, restless. My name is Echo Morgan, My real Chinese name is Xie Rong. I grew up in ChengDu, the pandas’ home in South-West China. I moved to the UK when I was 19. In my work I take on the role of director, performer, narrator. I am collecting and collaging encounters from my cultural roots in China and my daily life in the UK. Through the mediums of performance and film I explore the intrinsic and complex relationship between violence, beauty, and vulnerability, re-examining how these antipodal constructs impact ideas of the 'self' and the body. There are three paths in my work: Writing, Live performance and moving image. My narrative is rooted with my family history. I explore my individual memory that is deeply embodied with China’s complex society - one that had undergone a series of philosophical, ideological and political transformations. They show as live performance, moving image, hand bind books, short stories and audio pieces. In live performance I often transform the surface of my body into symbols: blue and white porcelain, Chinese landscape painting, jade Buddha and Chinese characters. I manipulate contemporary meaning into tradition iconography. I often invite viewers to participate, drawing strength from the audiences’ emotional vulnerability, and feelings of uneasiness, to complete the performance as a whole. Here, my emotions become entwined with the audiences’, creating a symbiotic relationship based on control and power. All the fragments act as a mechanical reproduction circle based on my Buddhism philosophy of Samsara. “ 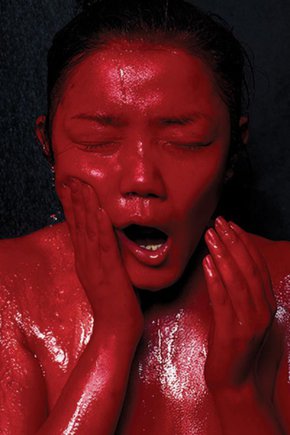