Born in the city of Baotou in Inner Mongolia, Cang Xin entered the Tianjin Academy of Music in 1986 and studied at the Nankai University and Tianjin Academy of Fine Arts from 1988-1989. Cang started painting in 1991 and moved to Beijing’s “East Village” in 1993. During this period, he began a series of performances such as the Trampling Faces, the Lick series,and the Virus series. In 1995, Cang joined a group of other “East Village” artists to produce one of the most well known Chinese contemporary artwork of the 90s—To Add One Meter to an Anonymous Mountain. In his artistic practice, Cang plays the part of a “Shaman,” experiencing the world and its multifarious things through his bodily senses. Cang carries himself as the focusing medium that connects nature with society. His selected exhibitions include: Like Thunder out of China at Arsenal Montreal (2013), Cang Xin: The Spirit of Translation at The Gallery of Chinese Cultural Arts in San Diego (2011), Rites of Nature at Beijing’s C-SPACE (2009), Cang Xin's Shamanic Vision at Seoul’s Space Can (2009), Cang Xin`s Mythology at Beijing’s Today Art Museum and Hong Kong’s 10 Chancery Lane Gallery (2008), Identity Exchange performance at London’s The Red Mansion Foundation (2006), etc. Cang Xin presently resides in Beijing. 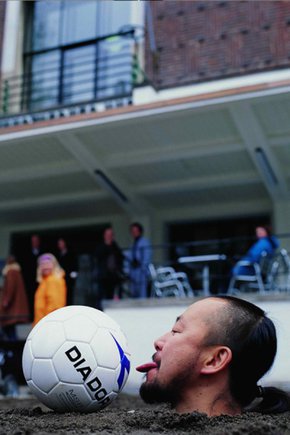