Alison Knowles (born 1933) in New York City is an American artist known for her prints, soundworks, installations,performances, and publications. Knowles was very active in the Fluxus movement, yet has evolved a major body of work since her Fluxus days.

In the early 1960s, published by Something Else Press, Knowles composed the Notations book, a survey of contemporary music scores, with John Cage. She made prints with Marcel Duchamp for an edition titled Coeurs Volants. Also, she has worked and performed throughout Europe, Asia and North America. In 1963, Knowles produced one of the earliest book objects, a can of texts and dried beans called the Bean Rolls. In 1967, Knowles and James Tenney produced the first computer generated poem, The House of Dust, winning a Guggenheim Foundation grant. A sound installation for The House of Dust public sculpture was produced by Max Neuhaus. The 1983 work Loose Pages, originally produced in collaboration with Coco Gordon, consisted of pages made for each part of the body. The performance uses the human body as the spine of a book. Since 1964, Knowles has made large and small experimental books: The Bean Rolls (1964) is a hand held, canned book of small scrolls of bean lore and information which has appeared in important artists’ books surveys alongside titles such as By Alison Knowles and More by Alison Knowles (1965/1979), Spoken Text (1993), Bread and Water and Indigo Island (both 1995). Passenger Books recently published a new collection of essays, transcribed interviews, articles and reviews related to The Big Book (1967), a walk-in book construction with 8-ft. tall pages, moving around a center spine, an early book as environment by Knowles. She has continued her examination of books at various scales, from The Book of Bean (1983) a second room size environment, to The Finger Book of Ancient Language, a table top book in Braille and other tactile languages (1987). The Boat Book (2014), her third book environment, commissioned by James Fuentes Gallery, appeared at Art Basel, Miami Beach, December 2014. In 2015 Knowles received the Francis Greenburger Award. In May of 2015, Pratt Institute awarded Alison Knowles an Honorary Doctor of Fine Arts. Her original Bean Garden was recreated for the Frieze Art Fair, 2015,

Tribute to the Flux-Labyrinth. She is represented by James Fuentes Gallery, New York and appeared at Frieze NY Art Fair 2014/15. Key performance venues include: Fluxus Inaugural Concert, Wiesbaden, Germany (1962), Fluxus Excellent Festival, Copenhagen, Denmark (1992) and Fluxus 50, Wiesbaden, Germany (2012). Six major performance works commissioned for West German Radio (WDR), Köln, Germany, 1986-1997. Bean Sequences for Rolywholyover: A Circus for Museum, L.A. MoCA, Los Angeles, California (1993) performance with spoken word and video. Proposition #2, Make a Salad ICA, London, England (1963) performed at The Tate Modern, London, UK (2008) for Fluxus Games. Participation in The 3rd Mind at the Guggenheim Museum, New York City (2009) with installed works and live performance with the Bean Turner Panel. Residency, lectures, performances and workshop at Radcliffe, Cambridge, Massachusetts, (2010) included works by the artist: Loose Pages, Shoes of Your Choice, Newspaper Music and Song of Your Choice. Performances at Performa, New York City (2011) included Red Beans All Day. The Identical Lunch, Museum of Modern Art, New York City (2011) Commissioned month long performance: prepared and performed in the cafeteria under the supervision of the artist. This coincided with the Fluxus collection of Gilbert and Lila Silverman exhibited by the museum and included original Identical Lunch silkscreen prints by Alison Knowles. Proposition #2, Make a Salad, ICA, London, England (1963) performed at The High Line, New York City (2012) to inaugurate the new Manahattan destination. The performance is documented in The High Line Catalogue. Performances and workshop at The Walker Art Center, Minneapolis, Minnesota (2014) included Proposition #2, Make a Salad, Shoes of Your Choice and Song of Your Choice. In the Fall of 2015 Knowles participated in Take Me I'm Yours, curated by Hans Ulrich Obrist at Monnaie de Paris in Paris, France. Her work Homage to Each Red Thing, a large scale interactive floor installation, was featured. Also, Knowles had a retrospective full room installation at The Cathedral Church of Saint John The Divine, NYC in The Value of Food exhibition. She included Homage to Each Red Thing and Red Beans All Day as a special event titled Celebration Red. In 2016 she travled to Palm Springs to perform an early work, Proposition #2, Make a Salad for the Palm Springs Art Museum. Her 40 year retrospective opened at the Carnegie Museum of Art in May of 2016 and she participated at Art Unlimited in the Basel Art Fair, Basel Switzerland in June. In September she has works exhibiting in NYC at the James Gallery and at The Jewish Museum. In October Knowles is an invited speaker at Creative Time and will perform at Beijing Live in Beijing, China. Key academic and cultural posts: Alison Knowles, 1933, New York City. BFA from Middlebury College, Vermont; MFA Pratt Institute, Honorary Doctorate, MICA. Guggenheim Fellowship 1967; Documenta Professor in Kassel, Germany and NYSCA Grant recipient in the 1990’s. Professor at California Institute of the Arts, 1970-72. Appearances and exhibitions throughout the Americas, Europe and Asia. Collaboration with John Cage, Marcel Duchamp, Dick Higgins, George Maciunas, and a Founding Member of Fluxus. Participant Fluxus Wiesbaden, Wiesbaden, Germany, 1962 and 2012. Fluxus performance activity provided access to major artists in the sixties and seventies, in many countries, whose ideas and connections were sources for further thinking in works including action, installation and book arts up to the present. 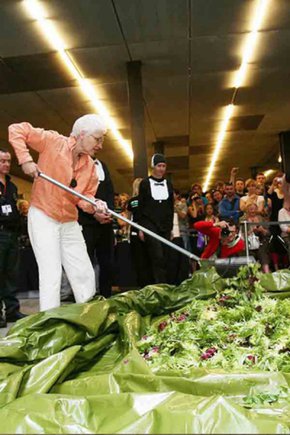